Taking It to the MAX

Maxsystems in Los Angeles uses keen management skills and RMR via security and service to build a $250,000 cash flow cushion.

If cash is king, then cash flow is the entire royal family. It's hard enough to build a custom installation company these days without the worry of having the cash on hand (or carrying a high line of credit) to pay your people.

At Maxsystems in Van Nuys, Calif., having a cushion of cash doesn't just save the company money over the short and long term, it's also used to build employee morale through incentives. The cash flow is driven by the integration company's structured training program, strong builder program aimed at large high-end homes, and a commitment to recurring monthly revenue (RMR) through alarm monitoring and service agreements.

It all adds up a strong bottom line cash flow for a growing $2.4 million custom integration business.

"I always maintain a certain amount of cash in the business. We always have a cash surplus. We've always got $200,000 to $250,000 in an account that we use to a buffer against a bad month... but we've never had a bad month, so there's always money," chuckles Max Angst, president of Maxsystems. But it's what the company does with that cash, along with some creative hiring methods, that has enabled it to thrive by attracting and keeping employees while the rest of the industry scrambles with a manpower shortage. 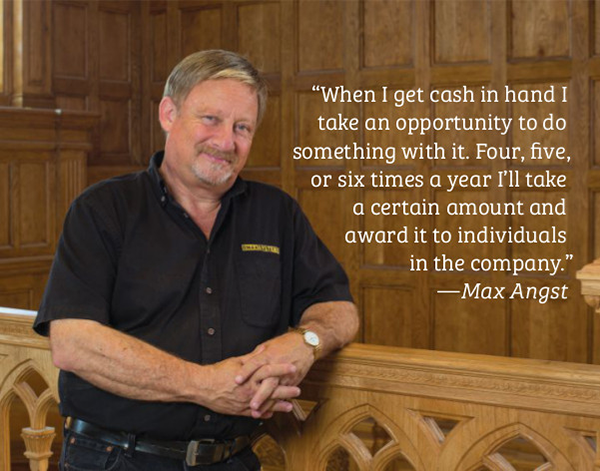 For starters, Maxsystems' employees reap the rewards of the solid cash flow, which helps Angst strengthen bonds between him and the team.

"When I get cash in hand I take an opportunity to do something with it," says Angst. "Four, five, or six times a year I'll take a certain amount — it may several thousand dollars or more — and award it to individuals in the company. The individuals who help us run the company, such as the guys who write our bids, run the office or do the programming, will get a few hundred dollars up to $1,000. I take an opportunity to hand it to them as often as I can do it. It's not a tremendous windfall, but it's a significant amount for somebody making $30,000, $40,000 or $50,000 a year."

Angst adds, "It's emotional between an employer and an employee to do that unexpectedly... unannounced. We found it to be very well received."

The only person who routinely objects to the practice is Maxsystems' accountant.

The reward system goes hand-in-hand with the company's hiring methodology, which has evolved in recent years as the economy has boomed. For years, Angst's hiring philosophy has been to meet a prospective candidate and advise them to go home and think about the job. Then, speak with the person the next morning.

"We wanted to give the candidate a chance to look us up on the Internet," admits Angst. "But the problem is people are being hired as quickly as they can. I might conduct an interview on Friday, call the candidate back on Saturday, and he already had another job interview, got an immediate offer and took it. It's an odd time. Everybody is busy. Everybody is looking for people."

So, in order to combat this dilemma, Maxsystems has altered its hiring methodology using its training program as the key to success. Today, the company grabs good candidates right away.

"I've realized it's better to grab people and hire them right away, even a couple of people. We'll pick up two or three people and we'll keep the best of the bunch," he says. "I'm changing because it seems to be appropriate at this time. Maybe a year from now it'll be different, but if I meet people that I have a good feeling about him, we're going make them an offer on the spot."

That new hiring procedure requires Maxsystems to have a solid training program in place designed to turn neophytes into efficient technicians.

"We have always found greater success in training people. We bring on somebody with some mechanical talent... with kind of a sparkle in their eye for the technology... and keep them. We teach them basic wiring; we teach them assembly of products, how to make things work, and if we're lucky we get somebody who wants to get into programming, high-end design and finish of work. If we're lucky, those people stay with us a long time."

Angst has found an influx of youth to Maxsystems' team that's eager to deliver exciting trends and newer brands making industry waves, as well as some of the tried-and-true custom industry staples that attract people to cool home technology.

"It's a young industry," Angst notes. "I've found that people I hire who are in their 20s and 30s are turned on by the Ring doorbell, Crestron control systems, home theaters, and big houses. They're excited like I've been all these years to see something from start to finish. There's no shortage of people who might get excited about being in the industry."

"All types of sizes of automated systems are currently strong and in demand, likely being driven by the recent availability of so many new consumer products," says Angst.

He estimates 90 percent of revenue comes from high-end custom-built homes, typically ranging between 10,000 and 30,000 square feet, with a price tag for those projects averaging around $250,000. These big projects require a large investment in man-hours and liquidity, because the construction can drag on for as long as two years in many cases.

Because Maxsystems has 16 employees, it can put multiple crews on a big job in force if needed.

"Sometimes, bigger jobs move faster and you need to keep up. There is an expectation that you will appear 'in force' to show that you're big enough to handle anything," Angst says. "We will double up on our crews on a big project to meet the physical and emotional needs of the customer. We handle a 25,000-square-foot house much differently than we would a 5,000-square-foot house."

He believes documentation and communication are the keys to success with large projects. Maxsystems produces phase-by-phase documentation for the technicians that allows them to have a daily understanding of the project's status. All schedules and activities for each department in the company are shared. Frequently, the team will hold brief meetings to allow for the exchange of ideas and information.

The firm maintains an open lessformal working office that includes a warehouse and designated area for rack assembly and testing. Demos for prospective clients are generally done in the company's conference room or at a previous client's home. According to Angst, building racks in an organized, clean area with all the connectors and miscellaneous parts on hand speeds up the rackbuilding process dramatically.

"Most people don't care about the racks, but the racks represent organization and serviceability of our work. Our rack assemblies range from simply utilitarian to works of art," says Angst proudly.

The company's focus on communication extends beyond the internal staff, especially on big jobs.

"Large projects are really a different animal. No matter how experienced you are, it requires a different amount of attention on a bunch of levels," Angst explains. "I will poke in regularly on these projects during the long construction cycle even if I don't have any work to do. I want the builder, architect and homeowner to remember who I am. I want them to remember me saying, 'What can I do to help?' That is not something I do on a smaller project, because we have a lot more back-and-forth communication on a smaller project that takes five to nine months. On projects that span years, we want our face to be familiar during the long gaps between planning, rough and finish stages."

Maxsystems creates Gantt charts for these large projects and maintains meticulous record-keeping, but none of that will replace a hands-on visualization of the project progress. Angst advises other integrators to make sure to never "get behind financially" on a big project. If man-hours and equipment costs are running high, he discusses it with the client.

"Our level of understanding of the client's needs represents the success or failure on a project," says Angst bluntly. Before a single wire is run, Maxsystems conducts multiple discussions, provides several layouts, and shows examples of products and interfaces to customers.

"We will deliver a full scope of the project with spec sheets on products and samples of our graphical user interface so the client can sign off," he says. "We have found that going through this level of detail and having them physically sign off keeps expectations in line."

That same level of detail is brought to the Change Order process. Every project has an original invoice with Change Orders documented in a new monthly invoice that lists additions, swaps, subtractions, payment due or credit earned.

At the end of the project, the paperwork creates a "story" of the project. To help the team stay on track, Maxsystems developed its own proprietary software. With all these processes inplace, it's no wonder Maxsystems recently became an inaugural member of the new Home Technology Association (HTA). To be accepted, the company passed a rigorous HTA vetting process for its technical competence, customer service and overall reputation.

With its roots based security, Maxsystems has always been a proponent of RMR (recurring monthly revenue). Today, the company has 400 monitored security accounts, with third-party monitoring done by CritiLink (formerly Computerized Monitoring Service).

On the service contract side, Maxsystems only started offering service agreements four years ago. Today, it has about 60 clients on contracts.

"We dragged our feet, because it's difficult. It's complicated," admits Angst. "We got over the mental hump that systems require service... systems become out of date. They're like an iPad or anything that needs a firmware update every year. Systems need service. Likewise, customers are entitled not to be inconvenienced."

Maxsystems started offering service contracts starting with its larger-scale installations. Clients receive regular maintenance on predetermined intervals of two, three or four times per year. The technicians generally clean all the equipment and inspect the system.

So why did it take so long for Angst to come around to offering service contracts? "It was my [hurdle] to get over. How do I make it valuable? How do I convince myself that I'm doing something the customer really needs?" he asks rhetorically.

The answer came in Maxsystems' desire to be a service company for its clients, not a break-and-fix repair shop. Today, once a project is completed, the company initiates a service contract with scheduled maintenance and upgrades. The result is that Angst says he is building client relationships that last much longer —"for the length of time the homeowner owns the home."

"In the alarm business, you know you are going to collect $20 a month from every client. On the service contract side, first we had $100 contracts, then it was $200. Over time, it becomes a significant source of income, and a predictable amount of work to schedule, which keeps my crews busy," Angst explains.

Maxsystems' pricing model for service agreements is "holistic" at this point, generally running about 5 percent of the total cost of the project. So a $100,000 project would have a $5,000 annual service contract.